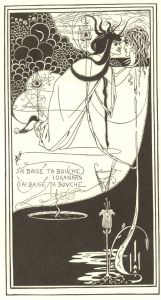 “In Britain the style was exemplified by the architecture of Rennie Mackintosh, Aubrey Beardsley illustrated images for contemporary literature that showcased the curvilinear style. “In France, despite Hector Guimard’s famous glass and iron Metro designs, the movement was best expressed in the applied arts, especially the glassware and jewelry of Rene Lalique (1860-1945) and Emile Galle (1846-1904).

In Belgium, the style was promoted through the Societe des Vingts (Les Vingt) established in 1884, including architects Horta and Van de Velde in its members.

Alphonse Mucha (Czechoslovakian, 1860-1939), designed posters in the style after moving to France.

In Spain the style was concentrated in the eccentric hands of Antonio Gaudi in Barcelona.

In Vienna, architects like Wagner and Hoffmann, and artists such as Klimt Gustav Klimt (Austrian, 1862-1918), gathered to promote the style through the Secessionist magazine Ver Sacrum..

In America architects like Sullivan and Wright were influenced by European ideas but conceived Art Nouveau in different terms, whilst designers like Louis Comfort Tiffany enthusiastically embraced the movement in his stained glass works.